Kaveh Golestan (1950-2003) was an influential Iranian pioneer of documentary photography. His photographic practice has hugely informed the work of future generations of Iranian artists. Besides numerous socially motivated projects such as the Citadel of Shahr-e No in the 1970s, Kaveh Golestan documented many major historical events including the conflict in Northern Ireland, the Iranian revolution, the Iran-Iraq War, and the Gulf Wars. In 1979 he was awarded the Robert Capa Gold Medal for “superlative photography requiring exceptional courage and enterprise abroad”. Whilst on an assignment in Iraq, Golestan stepped on a fatal landmine on 2 April 2003. He died in Kifri in Northern Iraq. 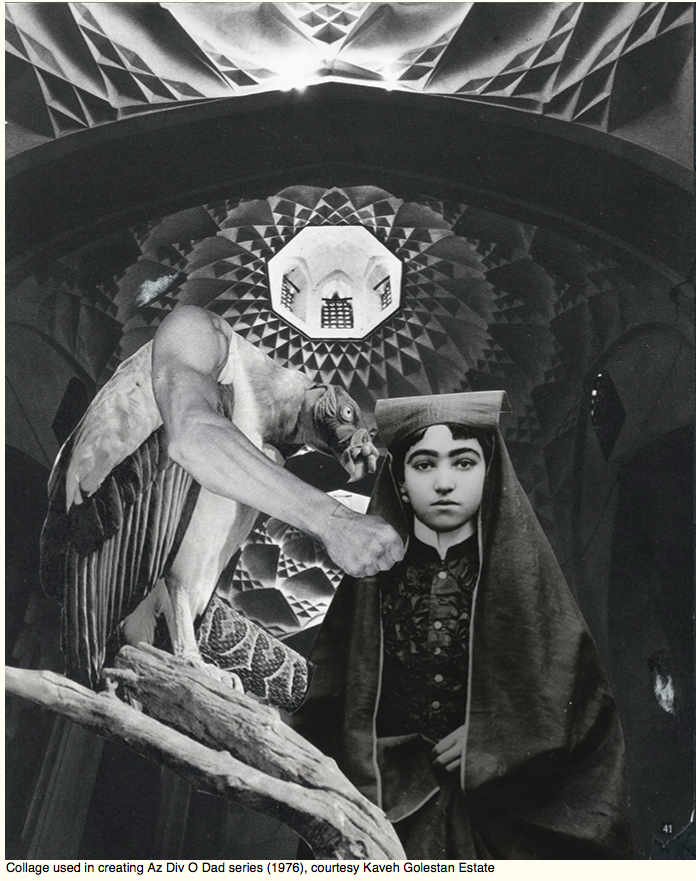 In 1976, Golestan created a series of innovative and striking Polaroids by moving collaged fragments in front of an open shutter over long exposures. The process created fantastical and surrealistic works that blend fairytale and history, appropriating found photographs and images from the 19th and 20th century. The collages depict visions of anthropomorphic, beast-headed uniformed and nude figures set against natural and architectural backgrounds with references to modern and Qajar era histories. These works open a window onto an experimental side of Golestan’s practice, which has received little critical exposure to date.

As a medium, the Polaroid is an important photographic format, which was used by artists including David Hockney, Helmut Newton, Ansel Adams, Andy Warhol and Andrei Tarkovsky over a short period of time. The Polaroid company ceased to exist in 2008.

The Az Div o Dad series is accompanied by a display of original artworks and collages, which shed light on the processes involved in the creation of the final Polaroids. The artist created these images in series by incrementally exposing the components over longer exposures. The consecutive creations show a gradual transformation of the image across each series.